The  experience of driving or being transported from place to place by a new and different transport mode or a stylish and enhanced upgrade of a well known mode of  gives a ‘sporty’ feel that transcends and enhances the normal day to day life journey. Sports cars with internal combustion engines I believe will be eventually phased out in preference to the global trend to the development of Electric Vehicles (EVs) and hydrogen fuel cells.  The most well known brand of EVs in the Market Place is  Tesla. Its vertical integration, ongoing innovation and direct selling  from its outlets gives Tesla a direct advantage over other electric vehicle manufacturers.

Major changes in government policy in Asian countries (in particular China) encourage and have legislated for the introduction of electric vehicles for  both mass transit and personal travel to reduce the increasing pollution in major cities. China, with its pollution issues is rapidly changing to electric vehicles for its traffic choked cities.  Their strategy if implemented will see about 30%  of global vehicles being electric by 2030.  The USA is lagging behind China in this aspect of converting to electric vehicles.  In addition, the advent of AI-linked collision avoidance technology in vehicles   should be a game changer for rapid transit across major cities. 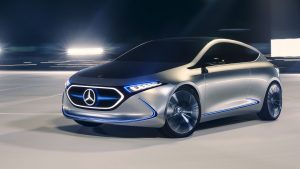 In Europe major luxury car makers are also creating electric vehicles. The trend in Europe is predicted to be at least 1 in 7 vehicle compared with 1 in 10 for the USA.  A recently released vehicle fro Mercedes Benz is the EQ.  The name EQ equates to “Electric Intelligence” .  Its derivation is Mercedes-Benz brand values of “Emotion and Intelligence” and the brand captures  customer-focused aspects of electric mobility through its linked system of products, services, technologies and innovations.  These include wallboxes and charging services and home energy storage units. This model will be launched into the Sports utility vehicle (SUV) segment  in Australia.

The development of passenger drones is an evolving trend to solve traffic congestion in large cities in the US and Dubai. Global aviation innovators that want to be the first to make drone taxis a reality include Volocopter. Lithium Jet (Germany),  Enhang (China), Uber Elevate (USA with NASA), Bell Helicopter (USA, City Airbus and Bell Helicopter.

Challenges that developers need to surmount are:

Digital trends has surveyed the Best electric bicycles of 2020

Specialized Turbo Vado SL Equipped is rated by Wirex as the 2020 best electric bike.  The XS frame weighs 33 pounds, only a few more than a regular steel bike. It has a hybrid frame with flat handlebars that make it easy to manoeuvre on a variety of surfaces, whether you’re scooting along at 28 miles per hour or bumping through trees at your local park. The bike has a  a 350-watt motor, a 604-watt-hour lithium-ion battery, the Turbo Vado and can travel 80 miles on a single charge, which should be adequate for a daily commute with plenty of charge left to cycle to the Supermarket on the way.

Segways for a great way to commute to work are allowed on sidewalks in 45 states of the USA  and are permitted to cross roads. They have a speed restriction of 15km per hour and have a battery life of 8-9 hours of continuous use.

Segways are not defined  motor vehicles under federal law. Consequently, their regulation is through  the United States Consumer Product Safety Commission as a “consumer product” and  the National Highway Traffic Safety Administration.

Most US states have passed legislation that particularly pertains to Segways. These devices are sometimes listed as “electric personal assistive mobility devices” under state law. Under the pertinent state legislation, Segway transportation may be instructed to occur on sidewalks, bike paths or smaller roads. Additionally, state laws may designate a minimum age that the rider must be to legally ride this device.  SEGWAYS are allowed in some states of Australia for example Queensland and Western Australia on the sidewalks, but banned in New South Wales.

As of 2015, 45 states and the District of Columbia  enacted legislation allowing  the use of electric personal assistive mobility devices. However, Arkansas, Kentucky, Maryland, North Dakota and Wyoming have not enacted legislation that addresses the use of Segways on public property, including sidewalks, bike paths or roads.

Some states do not permit any type of electronic conveyance to be ridden on sidewalks or bike paths. State laws may specify whether the Segway rider is considered a pedestrian, cyclist or other individual. In some instances, state law deems the Segway a motor vehicle if it is ridden in a location where there is a large minimum population. Additionally, most states include wording under their legislation that allow for towns and cities in the state to pass separate legislation that can prohibit or permit the use of Segways in specific localities.